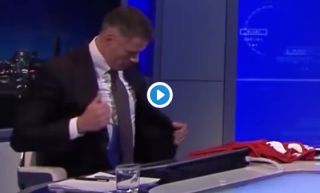 Liverpool legend Jamie Carragher has done the unthinkable and put on a Manchester United shirt ahead of tonight’s big game against Manchester City.

As you’ll no doubt already know, a Man Utd win against City tonight would really put Liverpool in control in this season’s title race as we head into the final few games of the season.

The Reds are currently two points clear at the top of the table, but City have a game in hand, which comes at Old Trafford tonight, so could overtake them with a win in the derby.

Still, to see a die-hard LFC legend like Carragher sporting a United shirt is pretty surreal.