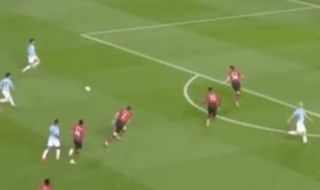 Manchester United had another pretty bad game against Manchester City tonight, even if it never quite reached the levels we saw in the 4-0 defeat to Everton.

The Germany international was given enough of a favour by the poor goalkeeping of United’s David de Gea, but this defensive shape by the likes of Chris Smalling, Victor Lindelof, Matteo Darmian and Luke Shaw was also amateurish.

Lots of work to be done at MUFC this summer…