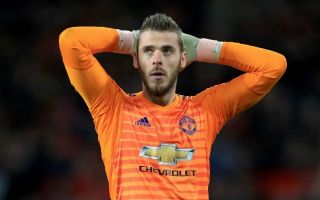 Manchester United manager Ole Gunnar Solskjaer has given his response to David de Gea’s shocking error for the Leroy Sane goal for Manchester City at Old Trafford this evening.

The Germany international found it far too easy to get his shot in as De Gea could only get a weak hand to it before it eventually found the back of the net for 2-0 to all but kill tonight’s game as a contest.

MORE: Bizarre: Manchester United star the only non-Liverpool or Man City player to make PFA Team of the Year

Solskjaer, however, was in no mood to single his goalkeeper out, despite De Gea’s form looking hugely worrying in recent times.

The Spain international has long been one of the finest players in the world in his position and a crucial performer for Man Utd, but he’s gone downhill rather rapidly this season.

Solskjaer praised him for making some good saves against City and seemed keen to steer the topic away from his ‘keeper, but fans will surely be aware that this is not the De Gea they’ve come to know and love.

Ole: "David made some terrific saves as well today. It is every day work for everyone. He has high standards. When we are having a time like this we need to stick together, batten the hatches down and keep working. We have to come back fighting on Sunday." #mufc [Sky]

Errors made by David de Gea directly leading to an opposition goal per Premier League season: