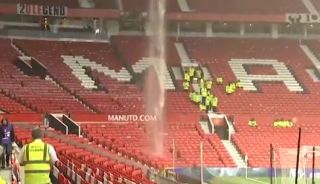 Old Trafford looks a bit of a mess this evening as we’re just hours away from the big game between Manchester United and Manchester City.

There’s loads at stake in tonight’s Premier League clash as Man Utd hope to put themselves back into contention for a top four spot and potentially put a major dent in City’s title hopes.

Spare a thought for the person sat in this seat at Old Trafford tonight ?? pic.twitter.com/057xbupHyv

Staff at Old Trafford have been going around the stadium wiping up puddles and splashes on seats. The roof's been leaking for a number of years. It's a stadium that needs urgent investment but has been left to decay. #mufc

However, some fans will possibly have to put up with large amounts of water chucking it down over their seats, if the video above is anything to go by.

Seriously, imagine paying that much money to have to watch your team potentially hand Liverpool the title – and get soaked in the process just to rub it in.

Hopefully they’ll have this sorted by kick-off…