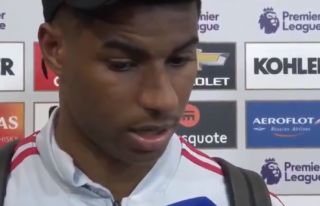 The Red Devils were poor once again as they failed to make up for that 4-0 hammering at the hands of Everton over the weekend, and Rashford admits it’s not good enough.

? – "Forget the top four, forget the @ChampionsLeague, we have to play like @ManUtd."

An honest assessment of the last few weeks from @MarcusRashford after tonight's loss to @ManCity. ??

Speaking very frankly after the loss to City, the England international made it clear he felt like the team aren’t playing like Man Utd at the moment and things have to improve.

Fans will hope the rest of the team feel as hurt as Rashford clearly seems to be here, with a strong response needed to bounce back from this dreadful recent run of results.