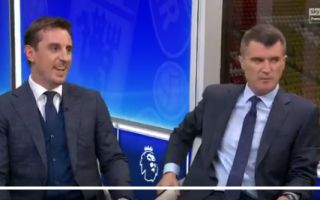 Unsurprisingly, neither were too pleased with what they saw, with Keane looking absolutely furious at the state of his old club.

Roy Keane was having none of it ? ?#MUFC #MUNMCIpic.twitter.com/olcLtDVbcD

Watch the video clip above as the former United captain slams midfielder Fred for ‘cheating’ with his poor effort at defending the second City goal.

The Brazil international hasn’t had the best season for MUFC, but even Neville had to laugh at quite how much Keane went in for him with those comments.