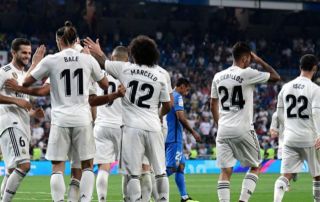 Tottenham are said to have submitted an offer of €70M (£60.7M) for Real Madrid ace Gareth Bale, as the club look to seal a return to north London for the Los Blancos star.

Bale previously played for Spurs for a number of years before sealing a move to the Spanish capital in the summer of 2013, and it looks like the club are keen to bring him back to the Premier League this summer.

As per Don Balon, Mauricio Pochettino’s side have submitted an offer of €70M (£60.7M) for the Welsh international, however this offer some way off of Real’s asking price for Bale, which is reportedly at around €130M (£112.7M), a total that’s £62M more than what Spurs have offered.

Bale has had a horrid time in Madrid these last few seasons, with injuries and inconsistent form plaguing the winger’s time in the Spanish capital.

The 29-year-old has come under heavy criticism in recent times, with reports of fans abusing him outside Real’s training ground appearing as early as March.

Spurs going after Bale may be down to nostalgia, as the winger was absolutely sensational for the club during his last few seasons in north London, form they’ll be hoping he can replicate should they manage to sign him this summer.

Given the fact that Bale isn’t getting any younger and has proven to be quite injury prone in recent seasons, Real should probably think about accepting this offer for the Welshman and let him seal a move back to the Premier League this summer.

But what do we know…