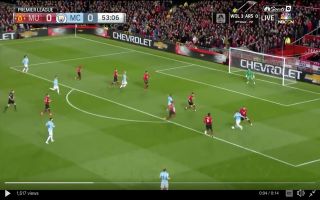 Manchester City have taken the lead against Manchester United after Bernardo Silva scored a lovely goal, could this be the most important goal of the season?

In the 53rd minute of the tie, Bernardo Silva picked up the ball on the edge of the box after a pass from Gundogan, Silva then showed off some silky footwork to trick Luke Shaw and create enough space to fire a shot at goal.

Silva hammered his shot past David De Gea’s near post. Pep Guardiola will be very happy with his side’s ability to get an important goal, early in the second-half. The pressure is now on United to get themselves back in the game.

Please follow : @goalstv3 to enjoy all goals on time ??

Has Bernardo Silva just scored the goal that could prove to be pivotal in this season’s title race?