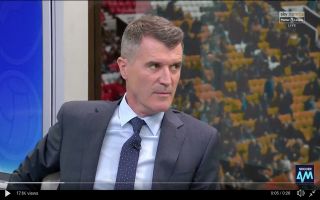 In the buildup to tonight’s Manchester derby, Keane revealed that he “wouldn’t believe a word that Paul Pogba says”, the Irishman later went on to state that he believes Pogba’s words have “no meaning”.

Keane reacted to a clip that the Sky Sports panel showed him in which Pogba was describing what United need to do, in order to make things right after being hammered 4-0 by Everton.

Keane went on to describe Pogba as a “big problem” for United. The Nottingham Forest No.2 didn’t stop there though, Keane joked that Pogba and his United teammates “threw their hair gel at each other” after the Frenchman revealed that things got ‘heated’ in the dressing room after the Everton defeat.

Check out Keane’s rant below:

Roy Keane did NOT hold back when asked for his opinion on Paul Pogba ? pic.twitter.com/GuaGUDqhjF

The former Red Devils midfield enforcer also blasted the entire squad for the lack of the desire they’ve shown recently:

"These are the same players that threw Mourinho under the bus and they'll do exactly the same to Ole." ?

Pogba will be hoping to prove Keane wrong tonight, and if he doesn’t there’s absolutely no doubt that Keane will vent about the Frenchman at full-time.