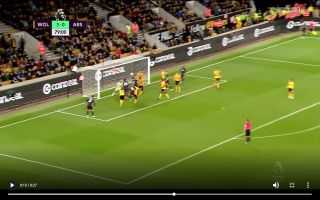 Arsenal defender Sokratis Papastathopoulos scored a consolation goal for the Gunners tonight against Wolves, the star rose highest to score this header.

In the 80th minute of the clash, Sokratis towered above everyone in the box to head the ball into the back of the net after Granit Xhaka’s corner.

Unfortunately for Arsenal, they’ve simply left things too late in order to try and salvage a result tonight.

The Gunners’ top four rivals will be over the moon to see Arsenal fall to defeat tonight.

Check out Sokratis’ header below:

Fans won’t be happy with tonight’s performance, the fact that Arsenal’s first shot on target came in the 80th minute says it all about the side’s showing tonight:

Sokratis scores with Arsenal's first shot on target against Wolves.

Arsenal’s chances of finishing in the top four have been severely dented after tonight’s defeat to Wolves.