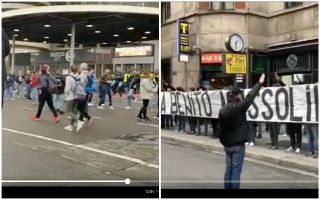 According to reports, these fans chanted “This banana is for you Bakayoko” in Italian.

The first-leg of the Coppa Italia Semi-Final ended in a goalless draw, so both sides have everything left to play for. It’s disappointing to see this kind of vile racist behaviour take away from what promises to be an exciting clash, the focus after the game will no doubt be on the latest racist incident in Italian football.

Here’s the video of the racist chants directed towards Bakayoko:

another episode of the Laziale’s racist act after racially abusing Bakayoko at the stadium TWICE without @FIGC blinking an eyepic.twitter.com/DwClVQpCLk

Milan’s fans supported Bakayoko with chants in his favour during the pre-match warmups, this is a classy gesture from Milan’s fans, you can see just how much it means to Bakayoko:

Lazio fans kept chanting racist things to Bakayoko and Curva Sud responded with chants in favour of Bakayoko and the player thanks the fans. Great moment. ??pic.twitter.com/JMdxC9MGgO

Some Lazio fans also directed racial abuse towards Bakayoko in the first-leg of the Coppa Italia clash:

It’s truly shocking to see that such vile abuse is still present in football, any fans found to be involved in these disgraceful acts should be severely punished.