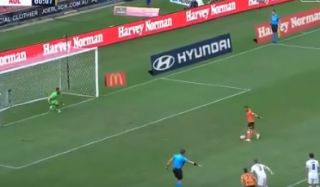 Brisbane player Eric Bautheac scored an ice-cool penalty in this A-League match, but we’re not at all convinced he meant it.

Watch this weird strike in the video clip below, as Bautheac seems to be about to try a Panenka chip down the middle, only to end up mis-hitting it but seeing it roll in anyway.

A penalty stroked in like you've never seen before! ??

The end result is a penalty that looks impressively cool, though he surely didn’t intend to just hit such a gentle pass into the back of the net.

Either way, it’s an enjoyable watch, though the goalkeeper surely has to do better, even if it surprised pretty much everyone including the taker.