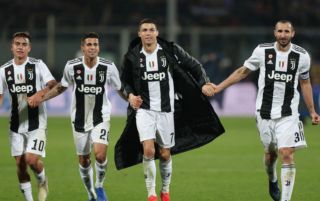 Man Utd have been paired with an interest in Joao Cancelo, and it’s been reported in Italy that his future at Juventus is in the balance.

As noted by the Metro, Antonio Valencia is expected to leave Old Trafford at the end of the season when his contract expires, while Ashley Young isn’t getting any younger either.

Having established himself as the first-choice right-back for much of the season, United certainly need a long-term replacement and perhaps a solution for the immediate future too as the stalwart’s performances have been poor recently.

In turn, it has been suggested that Cancelo is a target for the Red Devils as noted by Tuttomercatoweb, who add that his future at Juventus is in doubt as they haven’t been left entirely convinced by his form this season.

The 24-year-old has made 30 appearances for the Turin giants, scoring once and providing eight assists, and although he did start the season in fantastic form, he has tailed off and even been dropped at times by coach Massimiliano Allegri.

With that in mind, he could be put on the market this summer and it’s suggested that Juventus will look to recoup the €40m they spent to sign him from Valencia.

Time will tell if that’s a deal that appeals to Man Utd, but certainly with Valencia and Young in mind, Ole Gunnar Solskjaer could do with bringing in a new right back to hold down that position for the foreseeable future.

As noted by the Sun, they have also been linked with a swoop for Aaron Wan-Bissaka from Crystal Palace, and so it would seem as though that particular position will be a priority for the club this summer.