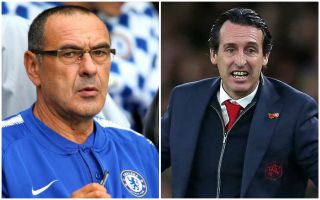 With their season at risk of collapsing, AC Milan are reportedly considering alternatives to replace Gennaro Gattuso with this summer.

Aside from crashing out of the Coppa Italia on Wednesday night, the Rossoneri are in an alarming slump in form currently which has seen the gap between them and their rivals for a top-four finish in Serie A close.

They now sit ahead of Atalanta merely on their head-to-head record, with the likes of Roma, Torino and Lazio not far behind.

In turn, the pressure is mounting on Gattuso to help them break out of their poor run of results and quickly as they face Torino on Sunday.

Time will tell if the Milan legend is capable of doing so, but their performances in recent weeks have been desperately poor, and so there is seemingly growing talk that a change could be made this summer.

As noted by MilanNews.it, among the names being paired with the post at the San Siro are Maurizio Sarri and Unai Emery, currently at Chelsea and Arsenal respectively.

With the all-important battle for Champions League qualification ongoing in England too, it remains to be seen if either of those capital clubs choose to make a change this summer if they fail to make it back to Europe’s top table for next season.

If so, then perhaps Milan will be prepared to swoop for either of them, while Atalanta boss Gian Piero Gasperini and Antonio Conte are also mentioned as potential candidates, albeit the latter is said to be potentially pricing himself out of a move given his salary demands.

Gattuso’s more immediate focus will be on keeping Milan in fourth place rather than being worried about his job safety, but it’s fair to say that if Milan do surrender their current spot in the standings, it will be considered a disaster for the Italian tactician.