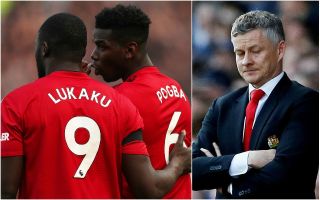 Amid further struggles this season, Man Utd striker Romelu Lukaku has dropped a big hint over where he sees his future.

The 25-year-old hasn’t been quite as prolific this season, bagging 15 goals as well as four assists in 44 appearances for the Red Devils across all competitions.

With Ole Gunnar Solskjaer often preferring a pacy attack with plenty of movement by using the likes of Marcus Rashford, Anthony Martial and Jesse Lingard, it has raised question marks over Lukaku’s future at Old Trafford.

Based on his comments below, although he has insisted that he’s focused on United for now, he seemingly hasn’t made any secret of his desire to play in Serie A one day.

“Playing in Serie A is a dream, it would be really a dream,” he is quoted as saying by Sky Sports.

“I hope to be able to play sooner or later, even if at the moment I am focused on the United.”

Time will tell when he gets an opportunity to do so, as with Man Utd still scrapping for a top-four finish in the Premier League this season, failure to qualify for the Champions League could force Solskjaer into some difficult decisions in the transfer market this summer.

As noted by the Express, the likes of AC Milan and Inter have been paired with an interest in the Belgian international previously, and perhaps this is a general message to them and their rivals in Italy’s top flight that he is eager to test himself in Serie A.

His comments surely won’t go down well at United though with the hierarchy or fans alike, as it doesn’t scream out that he’s fully committed to the club if he can even entertain questions and ideas about his future being anywhere other than Man Utd.