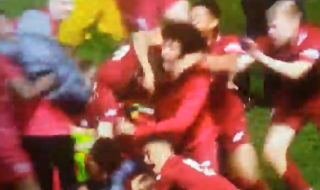 Liverpool have beaten Manchester City to a trophy this season – even if it is only the Youth Cup after tonight’s penalty shoot-out success.

The Reds are up against City for the Premier League trophy in what looks like being one of the most thrilling title races in living memory.

And City manager Pep Guardiola was actually spotted in attendance to watch tonight’s penalties as his youngsters were ultimately beaten.

Pep Guardiola stuck it out to the bitter end… pic.twitter.com/OoJWqRu3eI

LFC fans will now be hoping their senior squad can hold their nerve in similar fashion and seal Premier League glory this May.