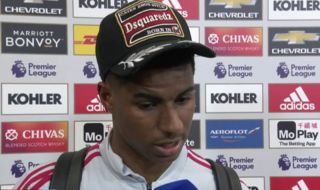 Manchester United legend Ryan Giggs picked on the most bizarre thing to criticise Marcus Rashford for in his post-match interview after the defeat to Manchester City.

The England international looked a frustrated figure after United’s 2-0 defeat at Old Trafford in last night’s Premier League clash, and was fairly critical of the way the team’s been playing in recent weeks.

This could have been taken as a dig at either his team-mates or of manager Ole Gunnar Solskjaer, but Giggs instead took issue with the fact that Rashford conducted his interview wearing a baseball cap.

The Welshman admitted that might just be his ‘old school’ views coming in to play, and we’re certainly not sure this kind of inane comment has any place in punditry.

“He’s a young player, we’ve all done it… an interview after the game, you’re emotional, you’re not happy,” Giggs is quoted by the Mirror.

“I don’t know why he’s wearing that cap, but that might be just me – old school, not like the modern footballer now.

Many former pros spend a lot of time criticising modern players for their haircuts, fashion choices and social media activity, and it does little but remind the rest of us just how out of touch they are with society these days.