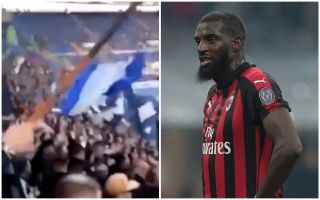 TIemoue Bakayoko was the target of racial abuse from Lazio fans on Wednesday night, with an inflatable banana seen in the stands in a disgusting gesture from those guilty of the act.

It’s important to not tarnish the entire fanbase due to the acts of a minority, but ultimately there has been countless videos and images posted of those who travelled to the San Siro in midweek aiming racist abuse at the AC Milan midfielder before, during and after the game.

It follows on from a row between Bakayoko and Lazio defender Francesco Acerbi, with the pair putting an end to their issue over Twitter after the recent Serie A meeting between the two sides.

However, some Lazio fans have taken it further and aimed plenty of abuse at Bakayoko over the past week and they were back out in their numbers ahead of Wednesday’s clash as seen in the videos below.

Time will tell what action the FIGC will take as they will surely be under growing pressure to do something about it, as this kind of behaviour simply isn’t acceptable.

As seen in the image below, an inflatable banana was spotted in the stands in the away end on Wednesday night, with Bakayoko and Milan crashing out of the Coppa Italia on the pitch as they suffered a 1-0 defeat with Lazio advancing to the Final next month.

Lazio fans even after the game are chanting racist chants aimed towards Bakayoko:

"This banana is for you Bakayoko"

They chanted this before the game, during the game and now after the game.