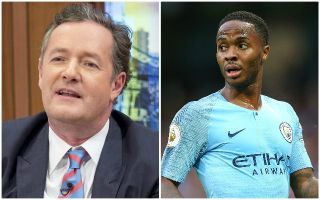 Manchester City star Raheem Sterling seems to have settled his feud with Piers Morgan – but that doesn’t mean he’ll be sealing a transfer to Arsenal any time soon!

The England international was heavily criticised by Good Morning Britain host Morgan around a year ago after he was seen to have had a tattoo of a gun done on his right leg.

Sterling later defended his choice and explained the personal reasons behind it, though the whole saga caused quite an uproar at the time.

Since then, however, there’s no doubt Sterling seems to have turned his reputation around with the tabloid press and has become a vocal figure in tackling racism and discrimination in football.

The 24-year-old has in fact won an award for his work tonight, according to BBC Sport, and this led to a bit of a chat on Twitter with Morgan.

During the back and forth, the celebrity Gooner tried his luck in persuading Sterling to make a move to Arsenal, with the player giving this response:

Morgan loved it, responding with laughing emojis, so we can safely say we probably won’t be hearing too much about that one again any time soon!