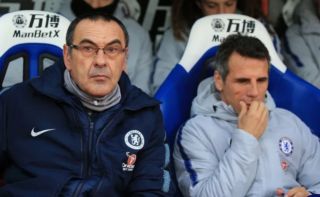 Maurizio Sarri’s coaching team at Chelsea are reportedly already convinced they’re set for the sack at Stamford Bridge after just one season.

The Italian tactician replaced Antonio Conte at Chelsea last summer and started well, but the club’s form has nosedived as the season’s gone on and they now face a struggle to secure a top four finish.

Chelsea owner Roman Abramovich doesn’t exactly have the best track record in terms of showing patience towards struggling managers, so it would not be a huge surprise if Sarri and his team were shown the door.

In fact, according to the Sun, many of the former Napoli manager’s backroom team are already openly discussing the fact that they expect to be sent packing at the end of this campaign.

This is hardly ideal for the mood at Chelsea as they chase that all-important Champions League qualification spot, with the form of the team already very up and down.

CFC drew with Burnley in their last game and take on top four rivals Manchester United at Old Trafford next.