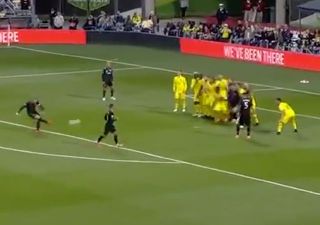 Wayne Rooney continues to show that he still has it as his free-kick led DC United to a 1-0 win over Columbus on Wednesday night.

The 33-year-old struck in the 27th minute with what was the only goal of the game as he secured all three points for his side.

SEE MORE: Video: Zlatan Ibrahimovic shows he’s a class act with six words of wisdom to nervous mascot next to him

The win keeps them top of the Eastern Conference having won five of their nine games so far this season, with Rooney scoring four goals and providing two assists in his seven appearances.

With his former club Man Utd toiling against Man City on Wednesday night as they continue to run the risk of missing out on a top four finish in the Premier League this season, his old teammates could arguably have done with his help in midweek.

However, as he continues to impress Stateside with his decisive performances on the pitch, his former teammate Ole Gunnar Solskjaer has plenty of work to do at Old Trafford to get things back moving in the right direction.