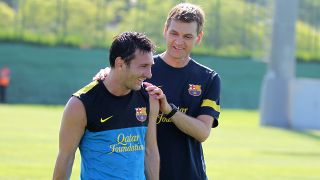 Jordi Roura, a former Barcelona coach during Tito Vilanova’s time at the club, has revealed the crucial role that the ex-Barca boss played in convincing Lionel Messi to stay.

Vilanova won a La Liga title in his short tenure in charge of the Catalan giants in 2013, but it was undoubtedly a tricky period for the club in terms of maintaining their success on the pitch.

The Spanish tactician sadly passed away in April 2014 but it appears as though his legacy lives on at Barcelona and the influence that he had at the club is still felt today.

Roura has been speaking about a meeting that Vilanova held with Messi just six days before he passed away, and it has been suggested that it was a huge turning point in convincing the Argentine icon to remain at the Nou Camp at a time when he was seriously considering an exit due to ongoing criticism and success at Real Madrid.

“It was a stage in which Tito was at a delicate moment and it is true that at that time Leo was not clear about their continuity,” he said, as per Marca. “They met and although I was not there, I know they spent several hours talking. I saw something that I did not see so clearly, I don’t know what they said, but Leo decided to stay here and we hope it will be for many years.”

Messi has continued to have a ridiculous impact for Barcelona, scoring 45 goals and providing 22 assists in just 44 games this season alone, as they remain in the hunt for a treble to add yet more major honours to the trophy cabinet.

Based on this story, Barcelona owe a huge debt of gratitude to Vilanova for playing a key role in ensuring that Messi is still at the club today, although his influence and impact went way beyond that too given his work on a daily basis as a coach during his time at the Nou Camp both as an assistant and in the top job.