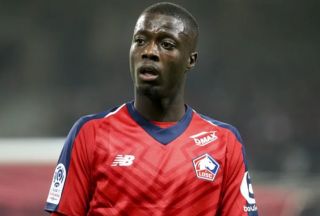 Liverpool have been tipped to ‘position themselves’ for Lille forward Nicolas Pepe as they are seemingly keen to bolster their attacking options this summer.

The 23-year-old has been in stunning form this season, bagging 20 goals and 12 assists in 36 appearances for the Ligue 1 outfit.

In turn, it’s no real surprise to see his name linked with top clubs, as Lille could have a difficult time in keeping him at the club this summer.

As per the tweet below from GFFN taken from Friday’s edition of L’Equipe, it’s suggested that Liverpool are ready to step up their interest in Pepe, but a rival €70m offer from Inter could yet scupper their hopes of landing his signature.

On one hand, it could be argued that that is one area of Jurgen Klopp’s squad that he doesn’t need to strengthen, such has been the form and consistency of his preferred attacking trident in Mohamed Salah, Sadio Mane and Roberto Firmino.

They’ve played a fundamental role in keeping the Merseyside giants in contention for the Premier League title and Champions League this season, although it could also be said that they’ve been fortunate to avoid any major injury setbacks along the way.

With the likes of Divock Origi, Daniel Sturridge and Xherdan Shaqiri offering depth, Liverpool perhaps need more long-term assurances going forward to ensure that they can continue to compete for major honours year in and year out.

That’s why a swoop for Pepe would make sense, and so it remains to be seen if they submit an offer to bolster Klopp’s attack this summer or not.

For now though, it has to be said that their priorities lie elsewhere with the title race and Champions League semi-finals in mind, but in order to continue to build on the momentum that they’ve created at Anfield, continuing to improve the squad will be crucial and Pepe would be an exciting addition.

Liverpool intend to position themselves for Lille attacker Nicolas Pépé in the coming weeks; the French side have received a €70m written offer from Inter Milan for the player in the meantime, according to tomorrow's L'Équipe.