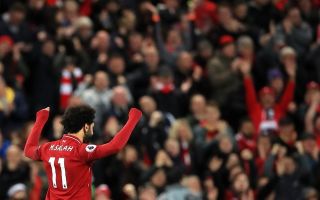 Liverpool superstar Mohamed Salah has followed in the footsteps of two of Liverpool’s most prolific forwards by becoming just the third player to do this.

During stoppage-time in the first-half Salah scored a sensational lob to give Liverpool a 3-0 lead against Huddersfield. Despite rival fans and pundits claiming that the star isn’t the same as he was last season, he’s continued to show that he has what it takes to put the sword to Premier League defences.

With his stunning finish, the 26-year-old became only the third ever player to score 20 league goals in consecutive seasons for the Reds. Salah joins the ranks of Liverpool legend Robbie Fowler and current Barcelona talisman Luis Suarez.

Check out Salah’s impressive feat below:

In addition to that Salah became the player

Mo Salah equals the club record for most goals scored in their first 100 appearances for Liverpool Football Club.