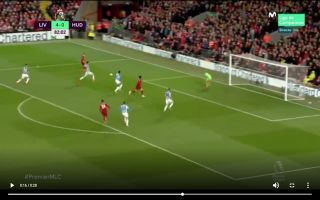 Liverpool forward Mohamed Salah netted his 21st league goal of the season after a classy team move from the Reds, to make it 5-0 to Liverpool vs Huddersfield.

In the 83rd minute of the tie, Naby Keita passed the ball into playmaker Xherdan Shaqiri, the Swiss star then threaded a lovely pass into the path of Andy Robertson and the Scotsman laid it on a plate for Mo Salah in the middle of the box.

Salah tapped the ball into the back of the net to complete a excellent performance for the Reds.

This was Robertson’s second assist of the night, taking his tally to 11 for the season, this equals the record for a defender set by Leighton Baines.

After his performance tonight it will be difficult for the likes of Sergio Aguero and Pierre-Emerick Aubameyang to catch up with Salah in the race for the Golden Boot.