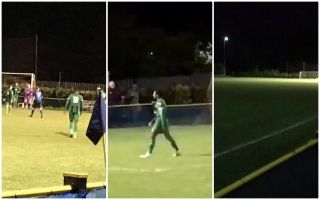 Julius Muraga caused quite the stir during Kidlington Development’s clash with Cheltenham Saracens this week after accidentally turning off the floodlights.

As seen in the video below, he was given his marching orders during the game, and after going back to the changing rooms to have an early shower, he somehow managed to hit the switch to the floodlights.

As noted by the Daily Mail, that in turn left everyone back out on the pitch in darkness as it’s added that he insists that he didn’t do it on purpose.

The two teams were eventually able to finish the game with Cheltenham picking up 3-1 victory, but thanks to Muraga’s accidental involvement, it was held up for around five minutes as the situation was sorted out.

Conspiracy theorists may well argue that he purposely turned the lights out after being sent off, but we’ll have to take his word for it and believe he wasn’t having a massive sulk about it.