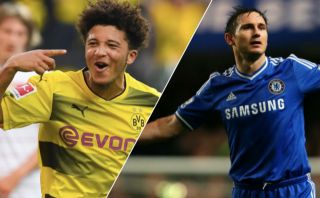 Jadon Sancho is establishing himself as one of the brightest young talents in world football this season, with his performances for Borussia Dortmund impressing fans everywhere.

The 19-year-old has been a key player for Dortmund so far this season, with the winger proving to play a crucial role in his side’s attempts to win their first Bundesliga title since 2012.

The England international has been on fire in the league for Lucien Favre’s side this year, with the player bagging his 14th league assist on the season for Mario Gotze’s opener against Schalke on Saturday, a video of which can be seen above.

This assist now means that Sancho has 14 for the season in the Bundesliga, one more than any other player in Europe’s top five leagues.

Sancho amassing 14 assists now means that he’s the first Englishman since Chelsea legend Frank Lampard to get at least 14 assists in one season in Europe’s top five leagues, a hugely impressive feat!

Most assists in Europe's top five leagues this season:

Given the fact that Dortmund still have three games to play in the league this year following their match against Schalke on Saturday, we wouldn’t be surprise to see Sancho increase his tally of assists between now and the end of the season.