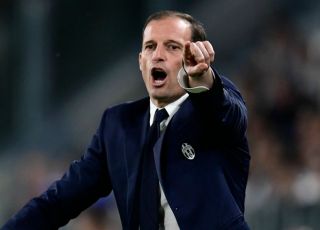 Despite securing an eighth consecutive Serie A title this season, Juventus continue to be left frustrated after further failure in the Champions League.

Their exit at the quarter-final stage came despite the arrival of Cristiano Ronaldo last summer, and so it could lead to further decisive decisions being made at the end of the season to make them a force in Europe.

Further, coach Massimiliano Allegri saw his side crash out earlier than expected in the Coppa Italia, and so by the high standards that they’ve set in recent years, this season has arguably been slightly underwhelming.

In turn, it could lead to key signings being made this summer, and The Guardian have suggested that they could have a mini clear-out of up to three players in order to raise the funds required and create space in the squad to take Paul Pogba back to Turin.

It’s added that the Frenchman could have a €130m price-tag from Man Utd, and so it certainly won’t be cheap for the Bianconeri to prise him away from Old Trafford with the likes of Miralem Panic and Douglas Costa specifically mentioned as possible players to depart.

Time will tell if Juve are successful in their touted desire to secure a reunion with the 26-year-old, while Marca note that Real Madrid are also keen on signing the World Cup winner this summer with Zinedine Zidane plotting a major rebuild at the Bernabeu.

With that also in mind, it’s arguably a worrying time for Man Utd and their supporters, as they’ll hope to see their midfield superstar remain and help Ole Gunnar Solskjaer’s bid to take them back to the top next season and beyond.

For all the criticism that Pogba has received this season, he has had a decent campaign with 16 goals and 11 assists in 44 appearances in all competitions for the Red Devils, albeit inconsistency continues to be his biggest problem.

Time will tell though if this could be his last season at United before he departs for a second time.