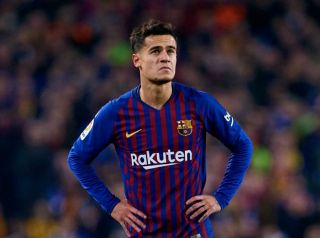 Barcelona stalwart Luis Suarez has offered an insight into his leadership skills after revealing his advice for Philippe Coutinho.

The Brazilian international hasn’t quite had the impact hoped for in his first full season at the Nou Camp, scoring just 11 goals and providing five assists in 49 appearances across all competitions.

In turn, that has led to criticism from Barcelona fans and at times a negative reception at the stadium towards him, but the Catalan giants do still remain on course for a treble this season with the chance to wrap up the La Liga title this weekend.

Suarez has revealed what he has said to Coutinho to try and help him get through a difficult moment in his career, and it remains to be seen if the 26-year-old can still go on to play a fundamental role for Barcelona in what promises to be a decisive month in their campaign.

“Barcelona players have to live with constant criticism, you have to have the inner mental strength to overcome bad times,” he is quoted as saying by Sport.

“Philippe is a friend, he’s young and I try to advise. In Liverpool, he proved to be the player he is. It was hard for me and I told him it would be the same. You have to accept criticism, but the most important thing is that he is comfortable, happy, his teammates trust him, the coach trusts him.”

As seen with the likes of Ousmane Dembele and others in the current Barca squad, it does take some players time to fully settle in their new surroundings and to adapt to the players around them.

While Coutinho was nothing short of brilliant in the latter stages of his time at Liverpool, joining Barcelona providing different challenges and so it remains to be seen if he’s given another chance next season to continue to prove his worth to coach Ernesto Valverde, the club and its supporters.