Paris Saint-Germain star Neymar will sit out his side’s first three Champions League games next season after UEFA slapped a suspension on him.

It relates to his post-match reaction on Instagram following PSG’s elimination to Manchester United in the last 16 of the competition this year, as a late Marcus Rashford penalty sent the Ligue 1 champions crashing out on away goals.

It was yet another huge disappointment for PSG in Europe, with Neymar sidelined for the tie due to an injury and so the Brazilian superstar was forced to watch on from the sidelines as the late drama unfolded in front of him.

Such was his fury with the decision to award the late penalty, he couldn’t contain that anger and posted a furious Instagram story slamming the officials and VAR, as seen in the image below.

“That is a disgrace!” his caption reads.

“And UEFA still pick four guys who know nothing about football to review the VAR decision in slow motion… that handball simply doesn’t exist!

“How do you handball behind your back? Ahh.. go f*ck yourselves.”

Unsurprisingly, that didn’t go down well with UEFA, and as noted by BBC Sport, he will now miss half of his side’s group stage encounters next season.

In fairness, it was undoubtedly a controversial handball call from the officials on Presnel Kimpembe, but ultimately the decision was given in favour of Man Utd and unfortunately for Neymar, he wasn’t able to contain his emotions after the game and accept defeat without lashing out. 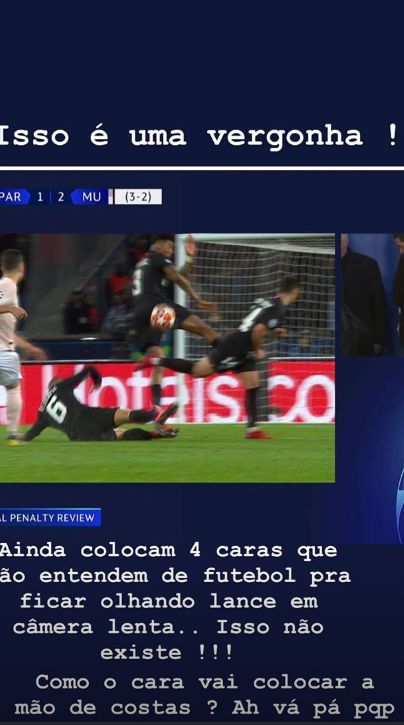