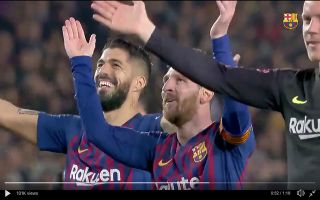 Barcelona fans were certainly in high spirits tonight after their side’s win against Levante sealed the victory of the La Liga title for Ernesto Valverde’s men.

Barcelona secured the title this evening thanks a superb goal from Lionel Messi, who stepped off the bench to provide the cutting edge for Barcelona at halftime.

Once the full-time whistle blew, the celebrations kicked in immediately and chants of ‘Allez, Allez, Allez’ roared around the Camp Nou, Barcelona’s players cheered on the fans and the entire Camp Nou erupted with emotion.

Check out Barcelona’s title celebrations below:

The ‘Allez, Allez, Allez’ chant is extremely popular with lots of football clubs around the world but it’s become synonymous with Liverpool fans in recent years.

Some Liverpool fans were left surprised when they realised Barcelona fans also sing the popular chant:

Can't wait for Barca to sing our Allez Allez Allez song like they are now, at Camp Nou, and it just spurs our players on ?

Barcelona look half decent attackwise, but defensively they look a bit ropey… And their version of 'Allez, Allez..' needs drummers to get them going, and even then it's half arsed… And this is them at home… #LFC

Barcelona will host Liverpool in the first-leg of their Champions League Semi-Final clash on Wednesday night, the mammoth encounter looks as though it can be really exciting.

The atmosphere at Wednesday’s clash could be electric, I’d imagine that both sets of fans will be belting out their renditions of ‘Allez, Allez, Allez’ which will be an amazing sight for fans to see.