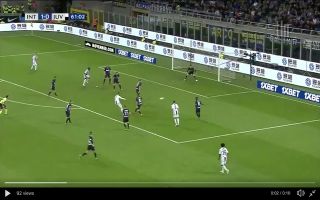 Juventus superstar Cristiano Ronaldo has produced the goods to draw his side level against Inter Milan, Ronaldo’s powerful strike left the keeper helpless.

In the 61st minute of the tie, Miralem Pjanic pulled off a clever backheel to tee up the ball for Ronaldo, the Portuguese star unleashed a wonderful first-time strike at goal and the goalkeeper was left rooted to his spot.

This game has produced two stunning goals, take a look at Radja Nainggolan’s Goal of the Season contender earlier in the game here.