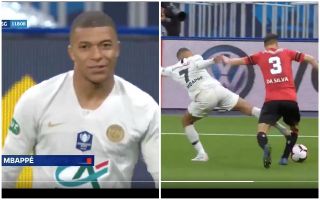 PSG superstar Kylian Mbappe has shocked fans this evening, the forward appeared to smile after being shown a straight red card for a horrific tackle in the French League Cup final.

PSG and Rennes played out a thrilling encounter this evening, it’s a shame that it could be overshadowed by Kylian Mbappe’s controversy.

In the 118th minute of extra-time during the clash Mbappe appeared to kick Rennes defender Damien Da Silva in his leg, the challenge looks truly shocking.

Mbappe may state that he was just trying to win the ball, but the fact that the Frenchman recklessly aimed his boot into Da Silva’s leg doesn’t paint him a very good light. There really wasn’t for Mbappe to put in a challenge.

After the referee showed a straight red card to Mbappe, the World Cup winner began to smile which shocked fans.

Check out the gruesome kick below:

There are people out there who actually like Mbappe.

Can't stand the guy, the little smile after he made that horror tackle says it all. pic.twitter.com/BquzZhaOfh

Check out some reaction to the superstar’s challenge below:

Holy shit… I know he’s been diving recently but is this a new thing or something he’s always done? That’s fucking horrible

You could literally see his bones extend outside his right knee, horrible challenge.

That tackle is shockingly bad & deserves to be punished accordingly. Hopefully the Rennes player is alright after that challenge.

Mbappe has now received a red card in all three of the French competitions he’s played in this season. Probably not the kind of hat-trick he was hoping to complete in tonight’s final…