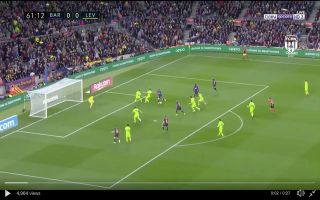 Barcelona superstar Lionel Messi came off the bench and made things look effortless as he scored the goal that can potentially secure the La Liga title.

Messi replaced Philippe Coutinho at halftime and it wasn’t too long before the five-time Ballon d’Or winner showed off his superb skill. In the the 61st minute of the tie Arturo Vidal played the ball into Messi’s path after Barcelona saw their efforts blocked by Levante.

Messi expertly controlled the ball and took Levante’s defender out of the game, Messi created enough space to fire a shot into the back of the net.

Barcelona will clinch the title with a win this evening, the Catalan giants will be nine points ahead of Atletico Madrid but Atletico will be unable to lift the title even if they match Barca’s points tally this season because of La Liga’s head to head rules.

Check out Messi’s goal below:

? | #BarçaLevante | Perfect buildup by the team for Leo Messi to score???

Please follow @goalstv3 to enjoy all goals on time?

After seeing Messi score one of Barcelona’s most important goals of the season in effortless fashion, one can only wonder how Liverpool have any chance of trying to stop the superstar on Wednesday night.