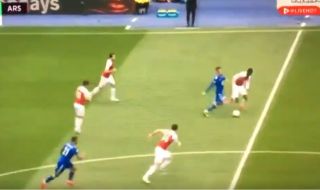 It’s not going Arsenal’s way this afternoon as Ainsley Maitland-Niles has been rather harshly sent off in the first half against Leicester City.

The Gunners have been distinctly second best at the King Power Stadium, and it looks like being another bad away day for the north Londoners as they’re now down to ten men.

niles get red card .. it will be hard for @Arsenal pic.twitter.com/fssu0kdvov

Watch the video above, however, as it looks like Maitland-Niles was rather hard done by with this second yellow, with the challenge hardly the worst and the first yellow not too bad either.

Arsenal are still at 0-0 at the time of writing and at this rate they’ll be pretty happy with that at full time.