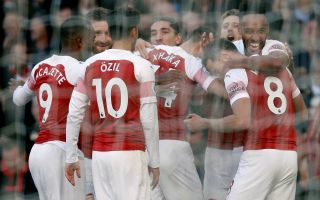 Arsenal fans are not too pleased with the line up on show against Leicester City in today’s Premier League clash.

Gunners manager Unai Emery has surprisingly gone with Shkodran Mustafi in defence once again, despite the German being shocking in the club’s last defeat to Crystal Palace.

MORE: Unai Emery reveals who could replace Aaron Ramsey at Arsenal, and Gunners fans may be left disappointed

There are a few dodgy calls by Emery in this line up, with Mesut Ozil also not involved, though since releasing their line up the club’s official Twitter page have confirmed that he and Nacho Monreal are out injured.

Mustafi, however, is the most baffling player to get the nod, with Laurent Koscielny only on the bench at the King Power Stadium.

Arsenal could really do without another slip-up today following Tottenham’s defeat to West Ham, which keeps them in with a decent shot of making the top four this season.

Manchester United and Chelsea also play later so can take points off each other, but Arsenal fans aren’t exactly full of confidence after seeing Emery’s XI today…

Seriously I would rather play with ten men. https://t.co/QZn6k2YnGP

Mental problem for unai? Why is mustafi there https://t.co/EoLoQtwudo

Mustafi in the lineup una why do i even bother anymore https://t.co/c3lDAJRCnS

Why is Mustafi still playing?