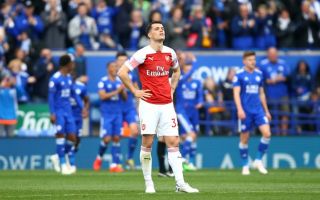 There’s plenty to say about Arsenal’s shocking performance in today’s 3-0 defeat at Leicester City as their rotten end-of-season form continues.

Firstly, the Gunners’ away record is diabolical, and their defence an absolute shambles, as they’ve conceded three goals for three consecutive games for the first time in 63 years.

This is far from good enough from manager Unai Emery, who replaced the legendary Arsene Wenger in the summer for what fans hoped could be the start of a bright new era.

Interestingly, the Spanish tactician has also seen Arsenal’s impressive record in noon kickoffs come to an end at the King Power Stadium today.

In a remarkable 19-game run, the Gunners had never lost a 12pm kickoff before today in the Premier League era, having won 15 and drawn four of those, according to Opta.

19 – Arsenal have never lost a Premier League game that has kicked off at noon, winning 15 and drawing four. High. #ARSLEI pic.twitter.com/zRYILxQFVi

It’s perhaps not the most damning of Arsenal stats, but it’s another unwanted record for Emery and more negative press for a club in crisis mode at the moment.