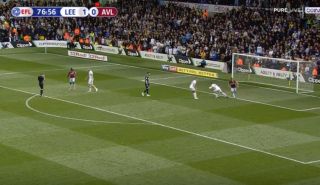 It’s absolutely bizarre scenes in the Championship right now as Aston Villa are allowed to score an equaliser unchallenged against Leeds United.

This all started with Marcelo Bielsa’s side scoring a controversial opener, having carried on playing with a Villa player down injured.

It’s then claimed Bielsa instructed his players to simply let Villa equalise unchallenged, though one or two Leeds players clearly didn’t get the memo – or agree with it.

Unsurprisingly, this bizarre goal is causing quite a stir on Twitter as it’s truly unlike anything we’ve seen in living memory.

– Mass brawl on the pitch after

– Marcelo Bielsa tells his team to give Villa a goal

– Adomah goes down the other end, Jansson tries to stop him scoring, still puts it in the net

Never seen anything like this before. Leeds score. El Ghazi sent off. Patrick Bamford lucky to get only yellow. Now Terry v Bielsa. Leeds then allow Villa go through to score uncontested goal. 1-1. "What the f*** is going on?" ask #lufc fans. FA will surely want a word.

Here is the opener for Leeds that caused the initial controversy…