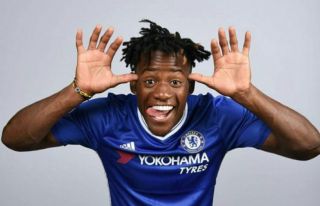 Forgotten Chelsea striker Michy Batshuayi has done one of his trademark hilarious tweets after today’s game against Manchester United.

The Belgium international, currently on loan from Chelsea at Crystal Palace, so not involved in the game at Old Trafford today, has not had the best of careers with the Blues so far, and may well not play for them again after struggling out on loan as well.

Batshuayi seems aware of his failings at least, having tweeted a response to a question on Twitter about the worst striker of the Roman Abramovich era at Stamford Bridge.

(dont mind me just checkin if I get mentionned here ????)

The original tweet had a picture of another flop in Alvaro Morata, while it presumably came as an invitation for Chelsea fans to complain about the poor performance of Gonzalo Higuain against Man Utd.

Batshuayi, however, joked that he was checking to see if he gets mentioned, which is probably a possibility, if a bit harsh as he was never first choice like bigger names such as Morata and Higuain.