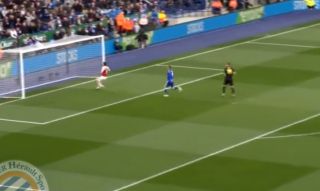 Arsenal were absolutely all over the place against Leicester City today as they lost 3-0 away to the Foxes.

Youri Tielemans opened the scoring early in the second half thanks to a lack of concentration from Granit Xhaka, and the defending didn’t get any better for the two late goals by Jamie Vardy.

Watch the first Vardy goal video below as the former England international heads home from close range after his initial lob hit the bar, with Arsenal undone by completely route-one football.

And then the second, in which Vardy taps home from close range as Leicester just rip through their opponents like they’re not there.

This is a dreadful result for Unai Emery’s side as they chase a top four spot, which looks increasingly unlikely with each passing game.