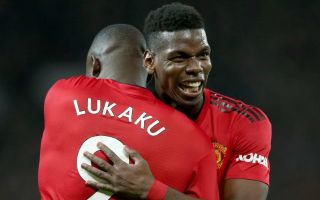 Manchester United striker Romelu Lukaku is having a fine game for the Red Devils against Chelsea in today’s big Premier League six-pointer at Old Trafford.

The Belgium international isn’t on the score sheet so far, but has seemingly turned into a world class midfielder with some of his link-up play.

Oh, and he absolutely battered Chelsea defender Cesar Azpilicueta when they met in a 1v1 situation on United’s left-hand side.

But, it’s his playmaking that’s earning Lukaku plaudits at half time, with the 25-year-old playing a delightful chip to Luke Shaw to set up the Juan Mata goal early on.

As well as that, Lukaku has generally drifted into dangerous areas by moving wide or dropping deep, showing a new side to his game after largely making a career for himself as an out-and-out goal-scorer.

Lukaku playmaking like a prime Iniesta? What is going on?

Lukaku in playmaker mode today and it's absolutely working out.

Lukaku got some Iniesta in him pic.twitter.com/5LQdxQHB2u

Watching Lukaku out here being a better playmaker than Pogba … ?

lukaku is a better playmaker than he is a goalscorer