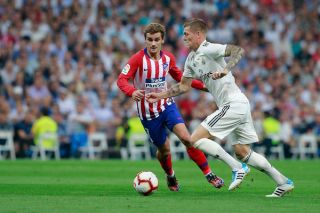 Manchester United could reportedly end up sealing the transfer of Toni Kroos as part of a deal that would take Paul Pogba to Real Madrid.

The Red Devils look at serious risk of losing Pogba this summer after another difficult season for them as a club and for him as a player.

AS report that the France international wants a move to the Bernabeu, and that his team-mates have been openly discussing his potential exit from Old Trafford.

And now Don Balon report that Kroos could end up being part of the deal, with United joined by rivals Manchester City as potential suitors for the Germany international.

It remains to be seen how good a deal this would be for Man Utd, with Kroos looking slightly past his peak this season with a series of underwhelming displays.

However, there’s no doubt the 29-year-old is a player with real pedigree, having won four Champions League titles in his career with Real Madrid and previous club Bayern Munich, as well as the 2014 World Cup with Germany.

Experience like that could be crucial for a United side in real need of winners and characters, with this group of players showing themselves time and time again to just be below par in that department, despite having so many talented players on their books.

Even if Kroos can only bring a good season or two to MUFC, he’d be an ideal Michael Carrick replacement and may well end up serving them better than the inconsistent Pogba anyway.

Toni Kroos could wind up at Manchester United