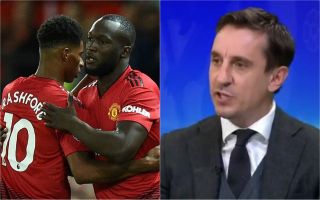 Although the Belgium international had a pretty good game for United, Neville felt he quickly looked exhausted after an explosive start to the match.

G Neville on Lukaku: “You see him make one big run and he looks absolutely shattered. He almost looks tired after one or two runs. He’s a big decision.” #mufc [Sky]

Despite a patchy season, Lukaku played his part in Man Utd’s opening goal against Chelsea, putting Luke Shaw through with a superb chipped through-ball, with Shaw then able to cross for Juan Mata to score.

Still, as he often does, the 25-year-old faded as the game went on, and occasional close-ups on the player on the TV cameras showed him looking noticeably more tired than anyone else on the pitch as he puffed his cheeks and seemed to breathe quite heavily.

This is a concern for MUFC, who need players who can run and put in 100% for basically 90 minutes if they are to get back to their best after this immensely frustrating season.