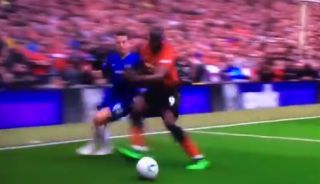 Romelu Lukaku is in the mood today as Manchester United lead and dominate Chelsea in their Premier League clash at Old Trafford.

Watch the video below as the Belgium international gets into a 1v1 situation with Cesar Azpilicueta and genuinely barges him into the pitch-side photographers.

This is incredible strength by Lukaku, but it’s a tad embarrassing for a top defender like Azpilicueta.

United fans enjoyed it, and they’ll be hoping to see more of this from Lukaku in particular after a bit of a quiet season…

Lukaku absolutely smashing Azpilicueta ? literally hit him so hard you could hear the thud from space.

Azpilicueta just got yeeted by lukaku

For a second I thought Lukaku bodied Azpilicueta out of the stadium ?????

Lukaku bodied Azpilicueta down there