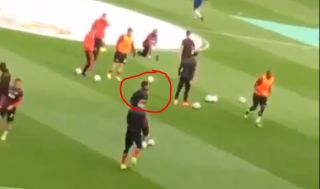 The France international can be seen in the video below doing absolutely nothing and simply standing around in the middle of the pitch while his team-mates train and get ready.

MORE: Manchester United move ahead of Arsenal in running to seal £56m transfer

Martial working hard in the warm up pic.twitter.com/8H9k6MlDDt

Martial ended up being an unused sub for Ole Gunnar Solskjaer’s side in their 1-1 draw with Chelsea, but with a warm-up like this that’s hardly surprising.

Get out you lazy sod.

He really is a lazy bastard.

He’s been a fucking joke since that contract got signed

He’s such a clown on times. No wonder he stayed parked on the bench today.