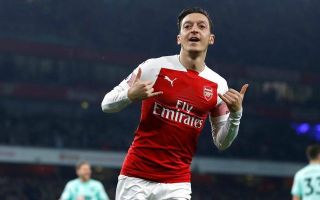 Mesut Ozil’s absence for Arsenal against Leicester City today will have raised one or two eyebrows, but there’s a perfectly reasonable explanation.

While Unai Emery has often left Ozil out of his Gunners side this season, the German has enjoyed more playing time in the second half of the campaign.

And, according to the official Arsenal Twitter feed, Ozil is only missing today because of a foot injury, with Nacho Monreal also out of action for fitness reasons as he has a calf problem.

MORE: Unai Emery reveals who could replace Aaron Ramsey at Arsenal, and Gunners fans may be left disappointed

Ozil could be a big miss for AFC in this important fixture, with Emery’s side needing to take advantage of Tottenham’s surprise loss to West Ham yesterday, and the fact that Manchester United and Chelsea can take points off each other today in this extremely close battle for a top four finish.

Leicester won’t be an easy away game for Arsenal, especially with their poor record on the road this season, so others will have to step up in Ozil’s absence.