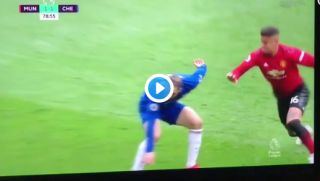 Manchester United defender Marcos Rojo looked extremely lucky to get away without a red card here as he went in with a horrible challenge on Chelsea winger Willian.

The Argentine came on as a sub due to the injury to Eric Bailly, and clearly felt like putting himself about against the Blues in this close Premier League contest.

Rojo should be off. awful challenge, even worse officiating. pic.twitter.com/5kKBPc2Li7

United still got the refs in their pocket. Disgusting from Rojo. Only a begrudging yellow card from Atkinson. pic.twitter.com/dvZPPjaehK

Still, Rojo really went too far here, with Willian also a lucky man as he seemed to escape without a bad injury, though he did go off shortly afterwards.

It’s 1-1 at the time of writing and it’s hard to say which way this game might go, but were United reduced to ten men Chelsea could well have taken advantage.