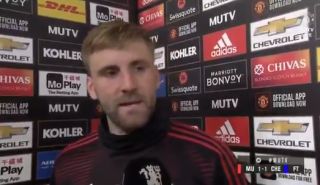 Manchester United left-back Luke Shaw was critical of his team’s finishing against Chelsea today in a possible dig at Romelu Lukaku and Marcus Rashford up front.

Although the England international did not name names, watch in the video below as seems to stress that United wasted some good one-on-one chances against Chelsea, which he feels has been a theme for the club all season.

It’s true that Lukaku missed a decent chance early on, though he helped set up the Juan Mata goal shortly afterwards and generally had a fine performance.

Rashford could perhaps also have done better with some of his chances, with one notably poor effort from a free-kick.

Shaw generally sounded hugely frustrated with the result today, with a 1-1 draw better for their opponents than for MUFC in the race for the top four.