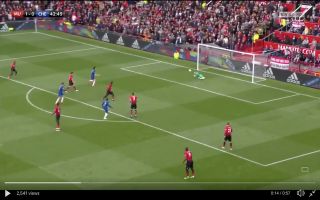 In the 43rd minute of the clash, Alonso equalised for Chelsea after a shocking mistake by David De Gea. De Gea spilled the ball into Alonso’s path after failing to handle Antonio Rudiger’s long-range effort.

Alonso still had some work cut out for himself, the full-back had to remain cool, calm and composed before knocking the ball into the back of the net.

De Gea can’t wait any longer for the end of the season to come, the stopper certainly looks as though he needs time away from football after his disastrous spell of form recently. Opposition players have punished De Gea’s inability to deal with long-range strikes in recent weeks.

Check out some reaction to De Gea’s mistake below:

It’s very clear the David DeGea is not fully mentally engaged in his football.

What is happening with de gea, ffs.

United will be kicking themselves after they threw away their lead right on the brink of halftime.