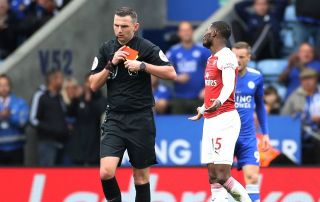 Premier League referee Michael Oliver and his wife were reportedly subjected to vile death threats and other abusive messages following Arsenal’s 3-0 defeat to Leicester City at the weekend.

The Gunners were thrashed 3-0 by the Foxes in a dismal performance, though they had to play much of the game with only ten men as youngster Ainsley Maitland-Niles received a red card in the first half of the game at the King Power Stadium.

Maitland-Niles’ dismissal did admittedly look a bit harsh as it came after two debatable yellow cards, but the Daily Mirror‘s reports of the messages sent Oliver’s way sound totally unacceptable.

Lucy Oliver, who took charge of Arsenal Women’s win over Brighton also received death threats, according to BBC’s Jacqui Oatley, who is quoted in the Mirror’s piece.

One Twitter user claiming to be an Arsenal fan said: “Michael Oliver deserves to be shot in the head”.

Other vile messages included: “Michael and Lucy Oliver deserve nothing but the worst. Karma will catch up with these two disgraceful cheating c****.”

Lucy Oliver also received some nasty sexist abuse about women’s football, and it’s certainly becoming a bit of a worrying trend that people hiding behind anonymous social media accounts feel they can send all kinds of abusive and threatening messages to players or match officials.